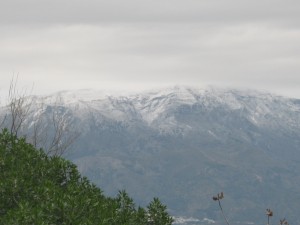 As my sister just said to me via Facebook – ‘Can’t be hot all the time sis!!’ Disappointingly she’s not wrong. I guess you could say that winter has hit Iznate. We have snow on La Maroma; note to hubby – won’t be climbing that then until it’s cleared!! and its bloomin’ freezing.

Tried to practice some yoga down in the restaurant on site (they let us use it as it’s not open at the moment) but we gave up after 40 minutes as my nose was running and I was starting to shiver – and I had 2 tops, a fleecy and 2 pairs of socks on!!

I know we can’t expect good weather all the time and it is only the middle of January but last week it was 25 degrees and I was in shorts and vest!

The cats are refusing to go out and have taken over the bed instead so I am trying to work in the midst of them all. But on the up side it is nice and cosy in the caravan and we are still very lucky to be here so I will stop complaining there.

Daisy our feral cat that we have been feeding since we arrived went missing last week. She disappeared for about 5 days before making a hasty reappearance on friday morning to eat before going again. We suspect she may have had kittens and has them holed up somewhere (hopefully in a place that is well protected and out of the cold) I am keeping an ear out for her today in case she leaves the kitties for some more food and am anticipating her bringing her babies to us at some point!! Hubby is obviously dreading this moment as he knows that it will be hard to resist little baby bundles of fur – for him as well as me. Am just thinking that we could stack the cat boxes one on top of the other in the back of the car when we go and get twice as many in!!!!

I’ll keep you posted on any kitten news.