The 1st of September saw our departure from Spain back to the UK on the next stage of our ‘European Journey’.

Leaving the Costa del Sol coincided with the worst forest fire in the area for 100 years. It began just up the road to us and it was scary to smell and see all the smoke and watch the water planes and helicopters buzzing over head.

Luckily for us the wind was blowing in the opposite direction but this was taken just a few miles away from us. Sadly though people lost their lives, property and animals perished. It left us feeling very sad to leave the area at such a time when much help was needed and it was with heavy hearts that we drove away in the middle of the night to get up to Madrid whilst it was still relatively cool. 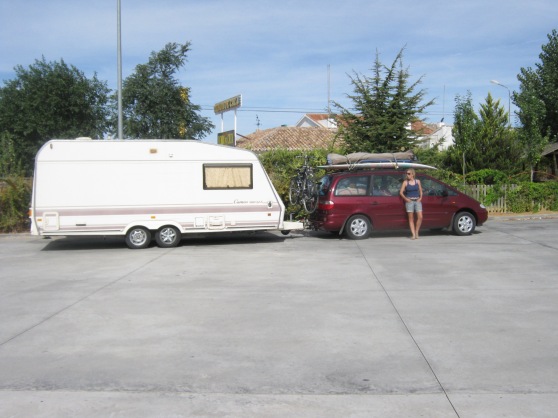 Once back on the road with the sadness of saying goodbye to friends and the worry of the fire behind us we fell right back into the routine of towing Bessie. We made the 350 mile trip up to Madrid and found the campsite with relative ease. Manevouring onto the pitch was a little tight as is most common with a lot of campsites. Too many pitches are squashed on and not enough thought given to the turning circles required of a rig 37ft in length.

However not to be disheartened we made camp, sorted the cats out and then headed into Madrid for the evening for some well deserved food and a little glass of beer!

Getting into the capital city required two buses and as is usual with buses in Spain the trip was a white knuckle ride with us being thrown around and left dazed by the time we got to our destination. Thankfully a lovely evening ensued as we wandered the streets taking in all the sights and atmosphere before finding a lovely, romantic bistro and enjoying a rare meal out.

Returning back to the campsite was an equally hell raising experience and this time in the dark and at speed we had little chance of locating our stop until the very last minute and then the driver wouldn’t stop for us. Not sure why he decided to not tell us we were coming up to our stop as he only had us and one other couple on board. The universe smiled on us though and the other couple came to our rescue and arranged for another bus to bring us back and this time we managed to alight the bus at the right stop. 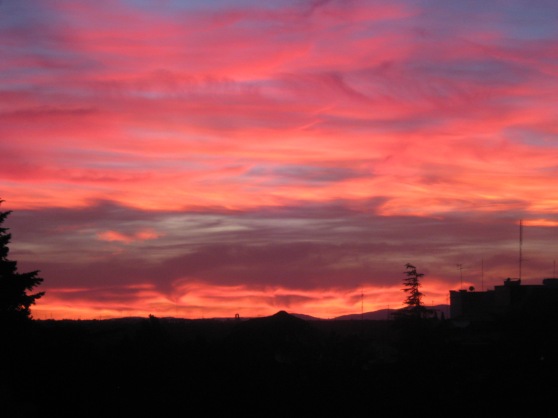 It didn’t spoil our evening though and we had a good giggle about it before retiring to bed and repeating the process the following morning so that we could see Madrid in the daytime as well. 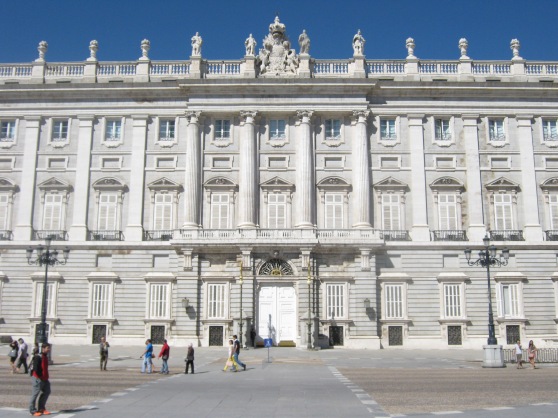 Madrid is a lovely city where they have managed to retain the old buildings, character and essence of the place unlike other capital cities we have been to where all the history seems to have been erased in place of new high tech buildings.

Perfect blue skies but a little cooling breeze accompanied us as we mooched around the streets taking in the sites and sounds.

Street artists were aplenty; although I’m not too sure what this last guy was all about, maybe Dougal aka The Magic Roundabout (sorry but only the English will get this one) just about to go to the local disco!! 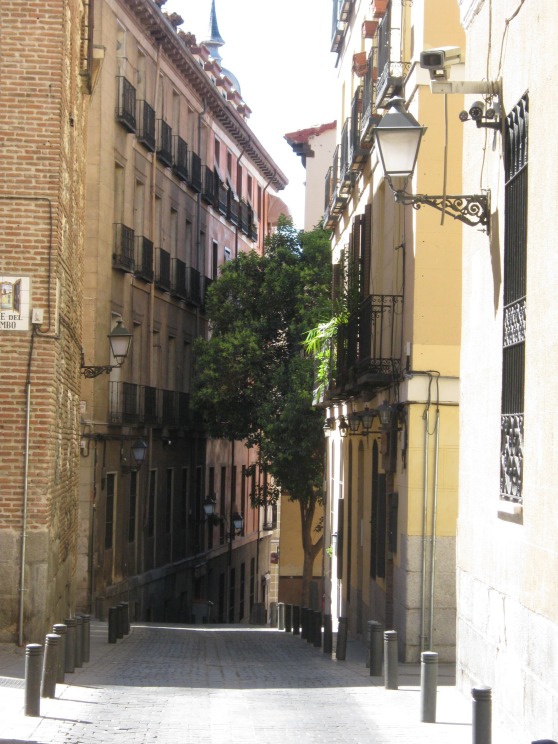 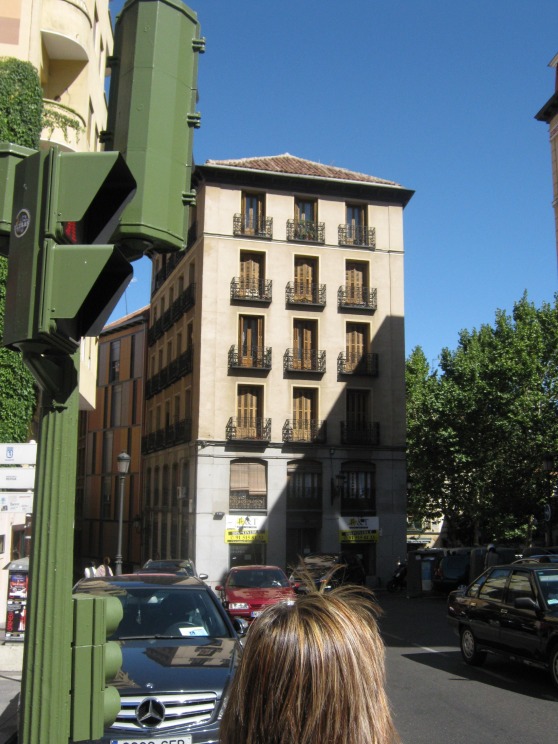 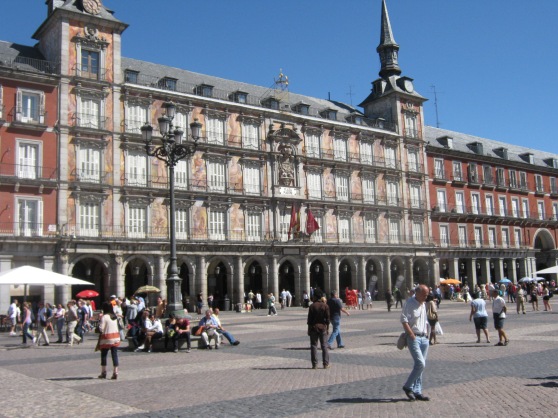 And a square that reminded me very much of St Marks Square in Venice greeted us as we slowly meandered our way across the city to the botanical gardens for a picnic lunch.

After a lazy few hours in the sun it was time to walk back to the bus station.

And a fast food outlet that didn’t really think its name through too carefully and we were back on the bus for our relaxing (ahem) trip back to the campsite.

After our two day break in Madrid we started the serious business of driving back up to the channel tunnel and the first night saw us in Pamplona, Northern Spain. No photo’s of this rather non descript campsite I’m afraid but with its cold showers I wasn’t overly impressed!! 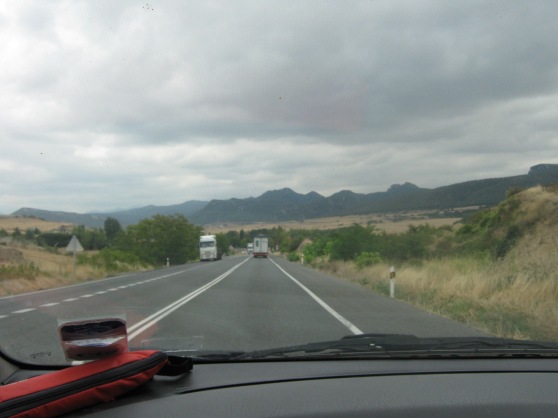 Setting off early the next morning we got our first glimpse of the Pyrenees and some rather nasty black looking clouds…..

Molly took to riding shotgun and as you can see there is lots for a little cat to look at…..

Next stop Angouleme and a campsite we had last stopped at 10 years ago.

The Lake was a gravel pit in the war where British troops used to land and be squirreled away by the resistance to fight the Nazi’s.

The nights grew cooler the further north we drove and Oscar needed a little extra warmth in the evenings. 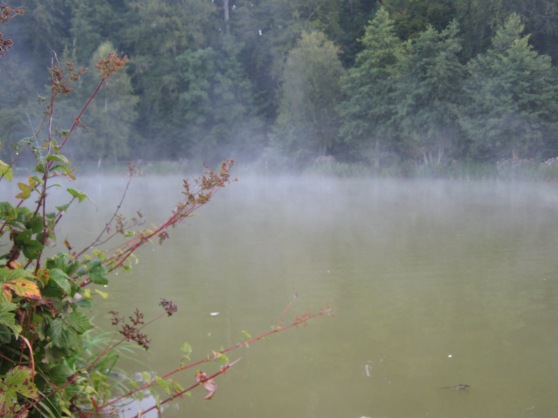 Next stop was Brevident and another campsite with Lake. The early morning mist provided a lovely photo opportunity although I’m not sure this picture shows how lovely it looked – or cold lol

On leaving the following morning and traveling around Rouen I managed to mess the directions up – in style. Unfortunately it was about 100 miles before I realised that we were heading east towards Paris and not north towards Calais……an ‘oh shit’ moment if ever there was one.

Because we had already spent a lot of money on toll roads that morning we stopped and purchased a local map and found our way back to the toll road that we did need via all the D and N roads. It proved to be a false economy as 8 hours after we had set off we found ourselves back on route but only 80 miles further north than when we had started out that morning and with 120 miles still to go!!

6 beers – in about 30 minutes – that evening helped soften the blow and we went to bed to prepare for an early rise to get to the channel tunnel and our train back to Blighty. 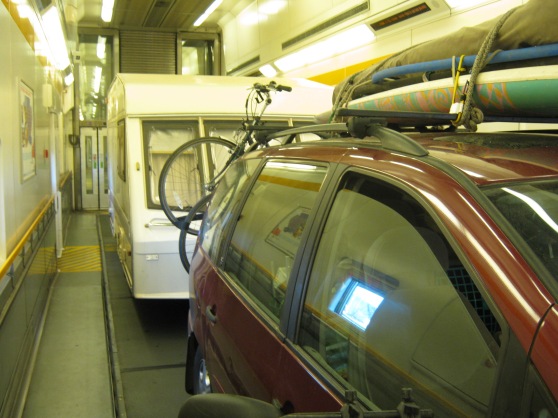 The cats were checked in at the Pet passport control first and with their ‘checked and controlled’ sticker on the windscreen we proceeded to the main check in and boarded the earlier train. 25 minutes later we were heading out and onto the roads of Folkestone.

Several hours later we pulled up outside my parents house where we spent the night before heading up to Thetford the following day. 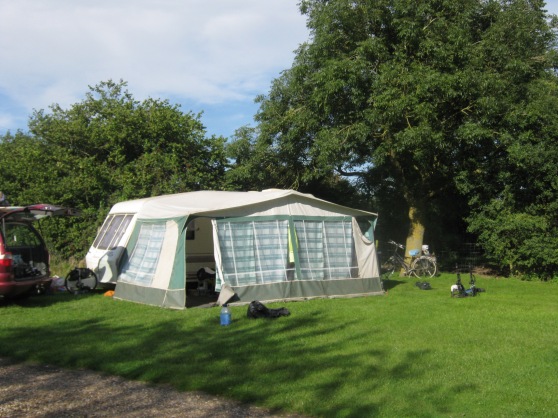 So far Norfolk has delivered warm, hazy sunshine (although I am sure it won’t last) and we will be at this campsite for about a week whilst we plan our next move!

A lovely English sunset marked our first night back in Bessy as we both breathed a sigh of relief that we had arrived back after 1500 miles safe and sound and ready for the next stage of our adventure…….an English winter!!

4 thoughts on “Spain to the UK”