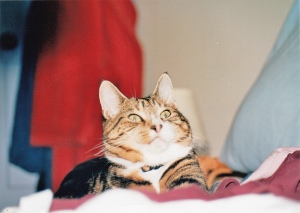 Molly is on a diet…….which is causing her no end of grumpiness. She can’t understand how suddenly she isn’t allowed to eat all her food up and then finish whatever Oscar has left as well.

But, tough measures are called for after she weighed in at 11lbs this week. For a little tabby cat with only 3 legs that falls into the rather excessive category. So she is now on a strict three meals a day and I am having to resist the temptation to go and pick her up when she is outside so she doesn’t have to hop everywhere (I know I am probably part of the cause but I can also be part of the solution too 🙂 )

Apart from a few major grumbles last night she is being quite good about her new regime doing what most cats do when confronted with less food than usual – she is sleeping a lot . I mean a girls gotta conserve her energy when rations are in short supply!!

Whether this will work or not who knows but I have to give it a try especially given her ‘ahem’ disability. On a serious note the last thing I want is for her not to be able to get about because she is too heavy to hop around.

Of course the other option would be something like this → Hmmmm….I think I will keep at the diet for a bit longer yet 🙂