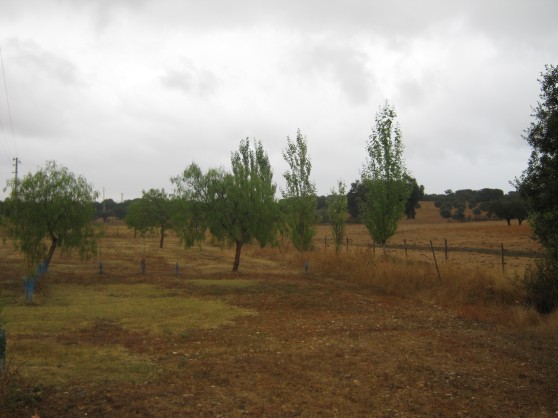 It had to happen but after over two months of hot sunny weather it was still a shock to be woken by the sound of rain pounding on the roof of the caravan.

I lay in bed this morning warm and cosy listening to the drumming drone of the sudden change in weather glad that we had already moved bags away from the edge of the awning last night.  The clay ground here is like concrete and so it will be a struggle for the water to drain away today but hopefully our ‘moat’ will do its job and keep the worst of the surface water out of the tent.

The ground desperately needs some rain, the meadows that were lush and green when we arrived are parched and stripped bare from the cows grazing over the summer. Sebio has been supplementing them on hay over the last month and has now moved them to the top field again so we have lost our inquisitive neighbours. 😦

Molly is cuddled up on the bed not wanting to venture out in the cooler wet weather and Oscar is curled up on a deckchair in the awning – a half way house as he is not quite ready to be a ‘bed’ cat again yet.

We are in for wet weather for the next two days and then the sun returns for the weekend and next week, but it is a sign that the seasons are shifting and our summer in Portugal is drawing to a close. We have about 8 weeks left here before we head back into Spain and it will be a busy 8 weeks as we have the bulk of our sightseeing and trips out still to come!!

It will be a struggle to drag ourselves away from our little oasis here in Portugal as we have had such a relaxing and laid back summer, but new adventures await and its time to get out and explore a little……… 🙂

There hasn’t been very much to write about over the last few weeks because quite simply we haven’t been doing anything.

Except trying to survive the searing temperatures that is – I think I may have mentioned them once or twice.

Since mid June the mercury has been on a steady rise, peaking over the last few days at a toasty 105F. When its that hot we really can’t go or do anything that involves us being away from the caravan longer than lunch time. Or else we would return to two very hot cats!

So, any outings have been put on the back burner until September when we are hoping the temperatures will be more manageable. We have lots planned though and it will be a busy few months with hopefully a night over in Lisbon and the treat of a stop over in a hotel – hubby has requested one with a bath as he hasn’t had one since last year!!!

To illustrate just how hot it has been:-

The coconut I cracked open yesterday had HOT water inside of it.

The potatoes in the awning actually start to bake themselves.

The cats have gotten used to their tuna being hot when it comes out of the tin.

And this morning when we woke up – or rather got up as we hadn’t actually slept that much the temperature inside the caravan was 28C (82F) the optimal temperature to sleep in is 18C.

The summer has been a learning curve for sure and not made easier by the fact that we have the cats with us. If it was just us then we would probably have moved closer to the coast where the temperatures are a little cooler but the campsites busier.

Oscar in particular finds the heat unbearable if it goes over 32C in the caravan and starts panting. We now let him out in the night if he asks as its just not fair on him and he tends then to just sit in the awning in the cooler night air.

Maybe we should be joining him!!

So, apologies for the lack of ‘exciting’ posts but hopefully full service will be resumed soon……

It is the 21st June today and the longest day. So that means from now on the nights will be drawing back in and we are on the countdown to colder days again. So far the promise of a glorious summer has failed to materialise and today is the first day in a good week or so that the sun has actually peeped out from behind darkened clouds.

Oh well, ho hum, what can you do…..except make the most of it before it goes away again and before the shops start the rundown to christmas which I’m sure they will soon.

Thankfully the cold damp and grey weather hasn’t seen me waiver from my raw food and I am happily munching down on the peaches and nectarines that are now appearing in the shops. For the moment they have replaced my beloved pineapples in the ‘favourite fruit’ stakes but my strawberries and raspberries in our garden are fast ripening and will be biting at their heels real soon.

The other great thing about warmer weather is that I can indulge in my newest most favourite pastime – yoga afresco. I love doing my yoga practice outside in the sunshine, it is such a peaceful and calming thing to do with the warmth of the sun beating down on me. Pure bliss – as I have said previously I am very easily pleased!!

So, for now I am one very happy bunny, munching on sweet juicy fruit and practicing lots of outdoor yoga. Lets keep our fingers crossed that the good weather continues……

Day 9 already and it is surprising how my cravings have now changed from food to juice. I can’t get enough of pineapple juice at the moment and it is all I am thinking about. I am trying to limit it as it is important to drink enough vegetable juices and especially green juices as well. I save my pineapple juice for the last one of the day and so it feels like a reward and is even more delicious than I had imagined……..

Juices today have been/will be:-

I received my veggie box today with a load of wild garlic leaves. I am going to juice these with some grapefruit tomorrow and see how that tastes.

Exercise today has been:-

How I feel today:-

Feeling good, lots of energy, light and happy. Feel like I am in ‘the groove’ with the feasting, it feels very easy. Am also glad that the sun has finally made an appearance and it is almost, quite possibly, if you shut one eye and squint, feeling like summer…….

Thanks for reading and happy juicing……..